GM Futurliner restoration gets a replica exhibit with aircraft models

We were surprised and delighted last year to receive a request from Ryan DeCol of Kindig-It Design to build a replica of an exhibit that had been in a GM Futurliner they are restoring for a client. Ryan found our website and thought our models of planes, trains, spacecraft, interactive exhibits and cutaways were high quality so he called us. Model Builders, Inc. since 1950 has a long history of working on projects for GM. Eugene Kettering (son of GM's "Boss" Kettering) was a close friend of William Chaffee, the founder Model Builders, Inc., and also an early investor in the company.

Originally there were 12 GM Futurliner buses and each one had a separate set of exhibits in it. This particular GM Futurliner had a "PROGRESS FOR THE AIR AGE" theme which included a full size cutaway of an Allison J-35 Jet Engine. If you would like to know the history of the GM Futurliners please see this youtube video http://www.youtube.com/watch?v=3ZGr3fLA5ow . If you are interested in the GM Futurliner restoration go to  www.kindigit.com and then click on the Facebook link in the upper right hand corner. Below are three photographs of the original exhibit. 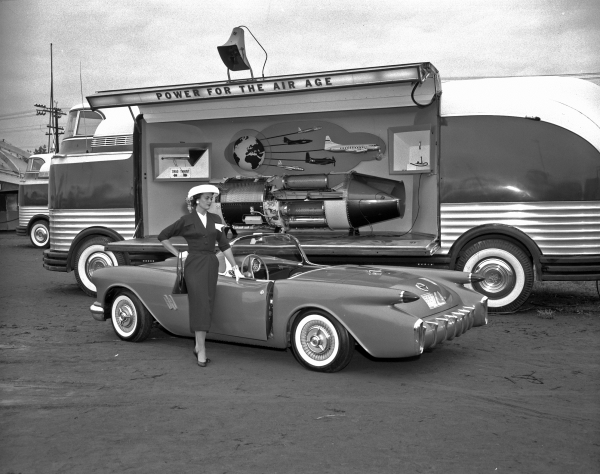 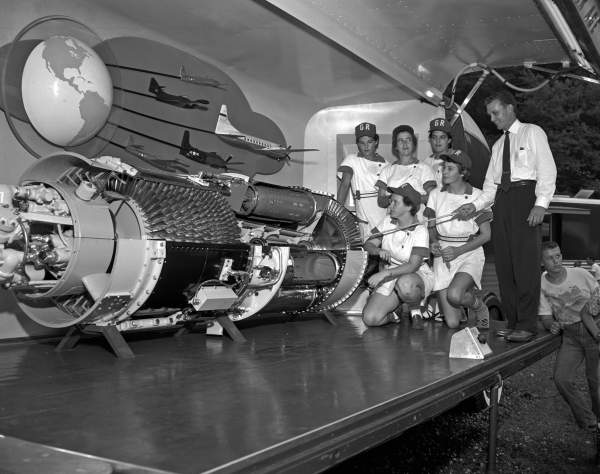 Discussing how a Allison J-35 jet engine works. It is cutaway so the viewer can see the parts. General Motors 2014 photo 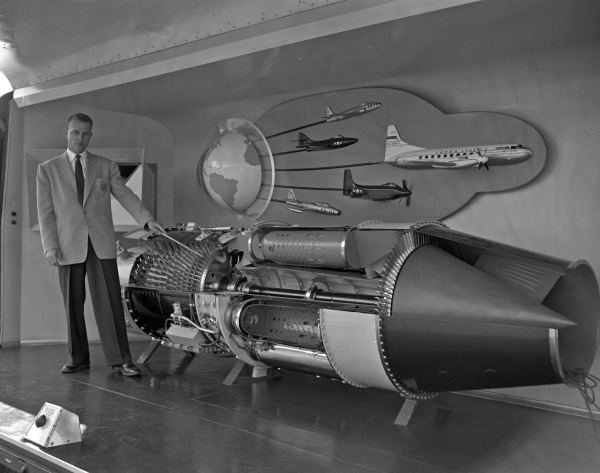 Presentation on the theory of how a Allison J-35 jet engine works. General Motors 2014 photo 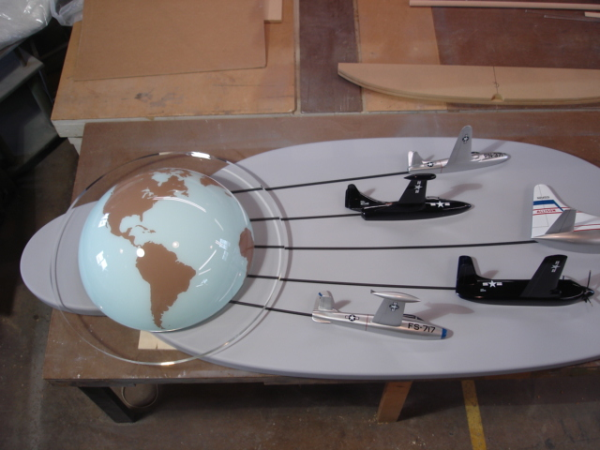 The cloud is 8 feet long and 3 feet high. The hemisphere diameter is 24". The continents and ocean we silk screened on the inside. The atmosphere is a 32" diameter clear acrylic disc that is 1"thick.

Replica of the Convair 240 at the right end of the cloud exhibit.

We did an extensive search but couldn't locate any of the original drawings. The pictures we found on youtube were too fuzzy or dark to be able to identify the aircraft. So we called retired GM manager Don Mayton who led the restoration at his farm in Zeeland, Michigan of Futurliner #10 starting in 1999 (however it had a different exhibit inside). A DVD on his restoration is available at http://www.futurliner.com/video.htm .  Don suggested we contact the GM Heritage Center in Sterling Heights, MI which has over 650 GM vehicles and extensive archives.  The GM Heritage Center was very helpful and found in their archives thirteen high resolution pictures of the PROGRESS FOR THE AIR AGE Futureliner which enabled us to scale the cloud exhibit and identify the aircraft.  Futhermore they sent us a copy of the script that the instructors used for this exhibit.

A blog in November, 2014 featured several nice pictures of the restored GM Futurliner No. 3 after it had been in the SEMA show in Las Vegas. There is a particularly good picture of the cloud exhibit we made in the last picture.  If you click on the picture it gets larger and provides a dramatic highly detailed view of the cloud exhibit. See: http://blog.classiccars.com/sema-seen-1939-gm-parade-progress-futurliner/ . If you would like to see the before the restoration pictures of GM Futurliner No. 3 see  http://blog.hemmings.com/index.php/2013/06/21/most-original-unrestored-futurliner-goes-under-the-knife-for-full-restoration/  .

Model Builders, Inc. is known for helping manufacturers, industrial designers, institutions and individuals go from idea to reality. Take the next step by contacting us at Model Builders, Inc., 773-586-6500 or info@modelbuilders.net .