"One Hundred Great Product Designs" by industrial designer Jay Doblin is the 1st of our 5 book reviews. Published in 1970 this book is a classic and sets the format for several similar books published later - products are in a chronological order, there is one large picture per product and there is a concise history of each product. 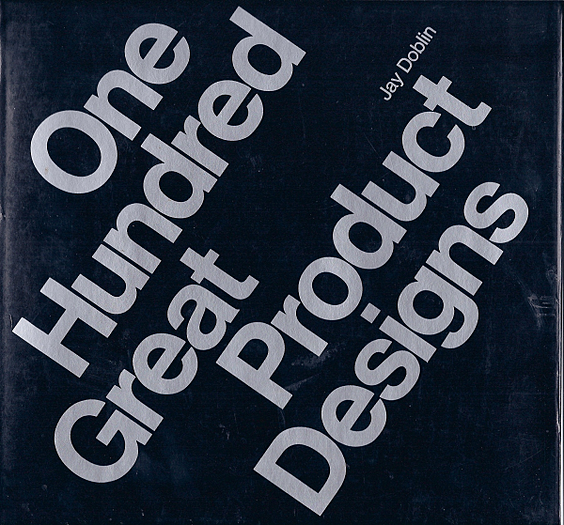 The Industrial Age resulted in thousands of products based on whatever the machinery could make efficiently. Industrial designers starting in the 20th Century managed to create a much smaller number of very carefully designed mass produced products. Henry Drefyus, Raymond Loewy, Norman Bel Gettes and other well known industrial designers were able to design the look of the future - often with streamlining and styling. In this book Jay Doblin takes us on a chronological journey of 100 great product designs from the 1742 Franklin Stove to 1965 Bell Trimline Telephone.

Jay Doblin went to Pratt Institute and was an executive designer with Raymond Loewy Associates from 1942 to 1955. For the next 14 years he was the director of the Institute of Design at the Illinois Institute of Technology. This book is the result of 10 years of research by the faculty at IIT in an effort "to find out which product designs were considered "great", and why". Only mass produced items designed, manufactured and distributed for sale were considered.

Some of the 100 Great Product Designs are: 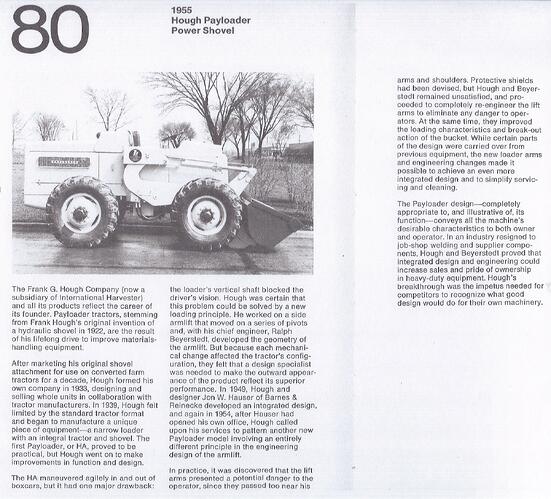 Industrial designer Jon W. Hauser from engineering firm Barnes & Reinecke updated the design and appearance of the Hough Payloader to reflect its superior performance. This proved that "integrated design and engineering could increase sales and pride of ownership in heavy-duty equipment."

Model Builders, Inc. was fortunate to work starting in 1950 with many notable industrial designers such as Jon W. Hauser, Raymond Loewy, Richard Latham and Dave Chapman.  One model we built was a 1/4 scale Hough Payloader that duplicated all the hydraulic actions of the front end loader by using minature cylinders and a new reversible pump unit.  The Hough Payloader model was a hit with potential customers at tradeshows and was written up in detail on two pages in the December 1956 issue of Applied Hydraulics magazine. Another project was creating two full size prototype seats and the custom ashtray prototypes for Raymond Loewy's Scenicruiser bus. The Greyhound logo and Scenicruiser bus are excellent examples of Loewy's styling and streamlining designs. 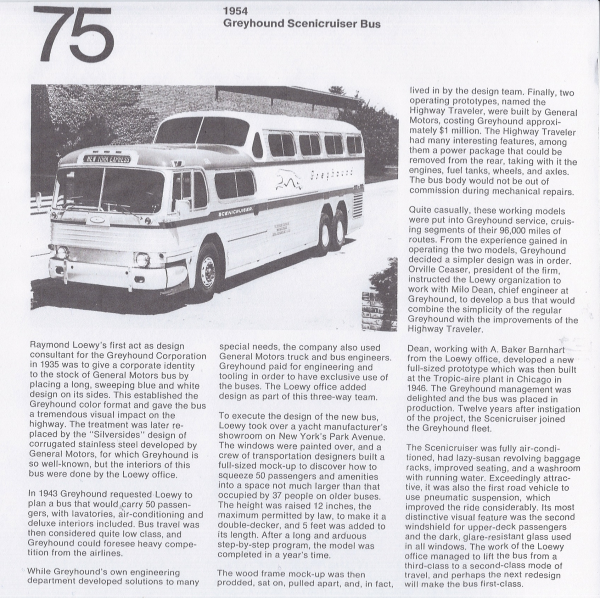 Doblin thought most of the current design then was "commercial and vulgar" but "the future had possiblities for excellence". He saw that the combination of what he called intellectronics and automation was producing abundant supplies with less labor and that cities were becoming centers of information handling, not manufacturing. Doblin included #87 the IBM RAMAC Computer 1957 with its disc storage in this book. He thought the computer would help man control increasingly complex systems and "result in a brighter, more rational world where cooperation replaces competition." Power would be based on knowledge and that would make education more important for everyone.

"One Hundred Great Product Designs" is a classic book that captures the impact that industrial designers made on mass produced products. The list first appeared on pages 135-141 of the April 1959 issue of Fortune magazine http://www.fulltable.com/vts/f/fortune/design/a.htm  along with a interesting explanation of how the list was selected. What makes this book exceptional is the carefully written explanation of the design significance of each product.