Model Builders, Inc. created a replica of the Apollo 8 Command Module for "The 1968 Exhibit" which is a month by month journey through a pivotal year for the baby boomer generation. See this video tour for a 4 minute overview https://www.youtube.com/watch?v=5hSSHSIJl08 and these photographs of the Command Module replica and some artifacts at https://www.flickr.com/photos/wbaiv/sets/72157632127075078/detail/ . This traveling exhibit is at the Chicago History Museum from Saturday, October 4, 2014 to Sunday, January 4, 2015. 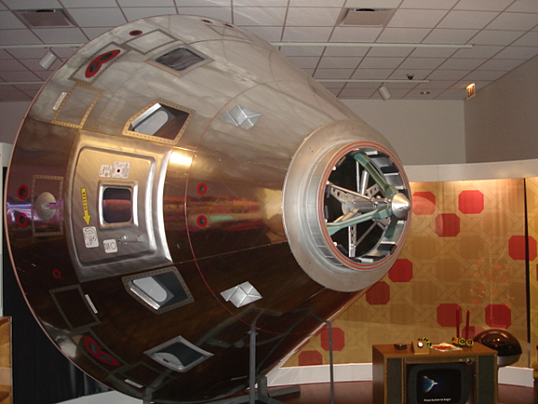 The real Apollo 8 Command Module is on loan from NASA to Chicago's Museum of Science and Industry and we examined it to ensure detailed accuracy. We had to deal with significant challenges however. For example, having gone through the extreme heat of re-entry the original Apollo 8 Command Module no longer has the silver reflective Mylar heat tape nor very much of the exterior labels that were originally on it.

Thanks to some careful analysis, the replica in "The 1968 Exhibit" has the silver Mylar tape and the pre-flight exterior labels. Like the original Apollo 8 the replica tape pattern is exactly same and the tape width is exactly 4" as on the original. Not all of the Apollo Command Modules had the same reflective tape pattern. However by closely examining the burned residue lines left on about half of the original Apollo 8 Command Module Model Builders, Inc. was able to confirm that the tape pattern we previously had found for the Apollo 13 Module was exactly the same as on the Apollo 8. Model Builders, Inc. was also able to find all of the exterior label details at NASA's Kennedy Space Center. 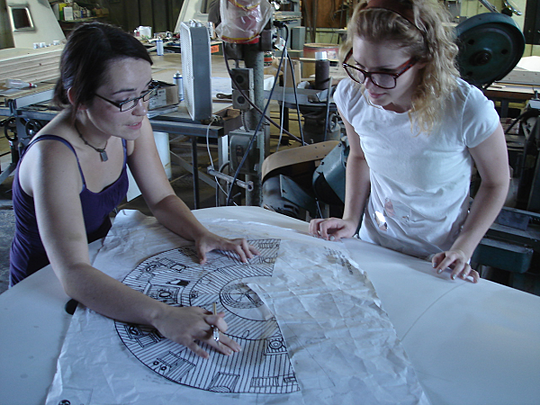 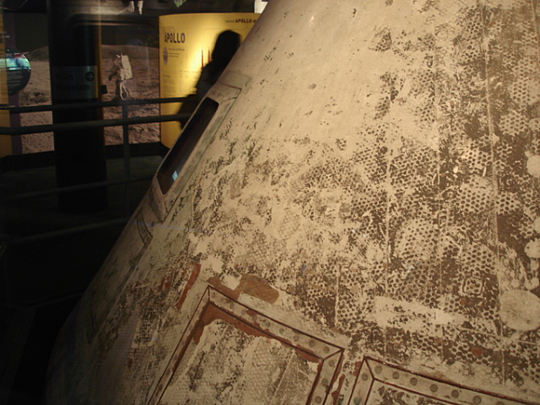 The Apollo 8 was the very first in the series of Apollo Command Modules to have a probe for connecting to the Lunar Module and this detail is shown on the replica. It is based on original NASA drawings and also close up photographs taken of a real NASA Apollo probe at the Kansas Cosmosphere and Space Center in Hutchinson, Kansas. The probe mechanism is quite interesting in that on the later Apollo flights it had to latch onto a matching drogue parachute on the Lunar Module. After both were pulled together the twelve smaller latches around the circumference of the docking tunnel locked them together.  That explains the two red circles (representing the silicon o-rings) outside the tunnel. Once connected the hatch in the Command Module was removed, then they removed the probe assembly, then the drogue and finally the hatch on the Lunar Module to be able to get into it. 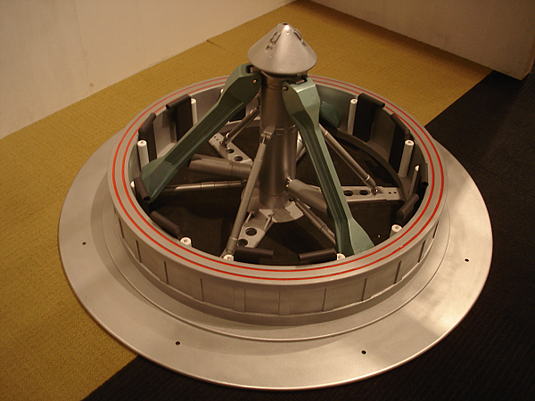 Model Builders, Inc. had already done a lot of the research necessary for accurately building this Apollo 8 Command Module replica. A few years earlier we built a 1/10 scale model of the Apollo 11 Command, Service and Lunar Modules and a 1/6 scale model of the Apollo 13 CSM -Command and Service Module (with the door blown off and the oxygen tank exploded) for the Kansas Cosmosphere and Space Center,  The 1/6th scale Apollo 13 CSM model sits next to the real Apollo 13 Command and Service Module in Hutchinson, Kansas. If you are interested in the details of the Apollo Command and Services Modules an excellent book with lots of illustrations in color and cutaway views is "Virtual Apollo" by Scott Sullivan. It is a pictorial essay of the engineering and construction.

We think you might really enjoy "The 1968 Exhibit". After Chicago the exhibit travels in 2015 to the Colorado History Center in Denver and after that the Bowers Museum in Santa Ana, California.